Since I last blogged about the LGBTQ & Friends Network at the Institute of Education, we have made great leaps! We have regular meetings and have a presence on the IOE staff and student intranet (which we hope will eventually be moved to the outward facing website) and have begun arranging events as part of LGBT History Month in February. We will have a cake stall in the foyer of the Institute on the 5th and 6th of Feb, to raise awareness, there will be some displays relating to LGBT History Month in the Library and Archives, and we are extremely pleased to be hosting a talk by Shaun Dellenty: 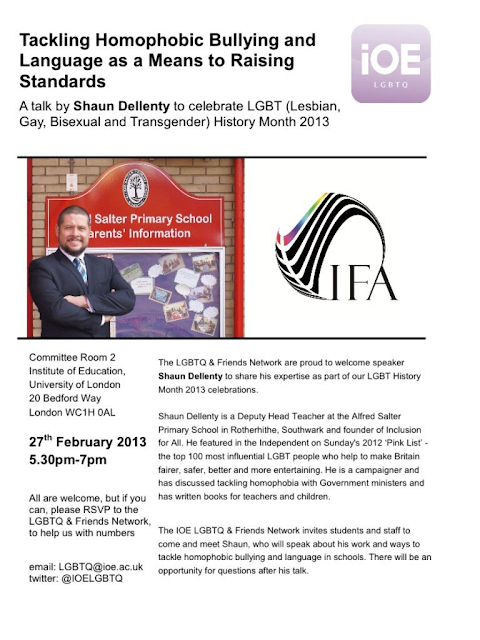 A delayed response to the Suzanne Moore debacle


I’m a bit delayed in my response to this whole debacle, I was hesitant to write anything about it really, because there are a myriad of blog-posts and writing about it that express disappointment and anger much more eloquently than I can (some examples here, here and here), I’m talking of course, about the “twitter storm” and the fall-out that happened as a result of the Suzanne Moore's article in the New Statesman. I decided to write something, because Moore’s most recent piece in the Guardian, which is a defense of sorts, made me quite angry, and if nothing else, I’m using this blog post to articulate my thoughts on this matter for my own sanity.

I’m not going to relay the whole thing, but basically a few people on twitter highlighted a throwaway comment in Moore’s original piece where she referred to the ideal body type for a woman as that of a ‘Brazilian transsexual’.  She received a lot of abuse about this, from (as Julie Bindel said ‘the trans cabal’?!) angry twitter users and subsequently in a (perhaps drunken?) attempt to defend herself against death threats and rude tweets, she entered into an immature and offensive rant along the lines of “cut your dick off and claim to be a better feminist than me” before “leaving” twitter, much to the chagrin of the likes of Caitlin Moran (of whom I’m a massive fan). In a misguided attempt to defend her fallen friend, Julie Burchill wrote a piece for the observer that was nothing short of hate speech. It’s not worth critiquing Burchill’s comment piece at any great length, anyone who can read will agree it’s horrendous, and saying that Burchill is tediously provocative, insensitive and unpleasant (aside from being an understatement) is like pointing out that the pope isn't a fan of gay people, ie: self-evident. Rather I’m interested in the hypocrisy of apparent “lefties” and feminists who have turned a blind eye to transphobia.

The kind of people who supported Suzanne Moore on twitter throughout her abhorrent ranting are also the kind of people who would have been outraged if Richard Littlejohn or Jan Moir had done it. I understand when people want to defend their friend/colleague, but on such a public platform, it’s not disloyal to be critical of the language they use.

I wonder if this whole series of unfortunately worded events will have a lasting impact on the media’s approach to discussing trans and women issues. I sincerely hope it will, but I think it would have more of a lasting impact if Suzanne Moore held her hands up and said ‘actually, I was in the wrong, I used some hateful language and shouldn't have done so’, rather than the ‘sorry you were offended’ approach of her defensive article. Naturally, I’m not even going to bother saying Burchill needs to apologise, she won’t, but otherwise decent publications and websites, such as the Observer need to learn from this and stop giving platforms to people inciting hate, and yes, she was inciting hate with the threat at the end of her article, and the childish and dangerous language she used.

The most interesting thing about all of this is how much Moore has challenged certain language relating to trans issues. Specifically ‘cis’ as in ‘cis-gender’ (which, contrary to Burchill’s assertion that it has something to do with ‘cyst’, is a latin prefix denoting ‘on the side of’ ie: gender identity and biological sex were aligned at birth). No one on the left likes labels, but surely we appreciate the necessity of them in discourse, be it about gender, sexuality, race, disability. We need terms to differentiate to help further debates. Of course, I’m not suggesting that people who are not trans should define themselves as cisgender, much like I don’t define myself as white or able-bodied, none of these terms (including heterosexual or straight) are derogatory terms, they are simply a way of acknowledging difference. To feel victimised or attacked by being referred to as cisgendered is like thinking there should be a straight pride, or a white history month, it’s an unhelpful response to a conversation, that implies that the privileged oppressor has somehow become the oppressed.

Likewise, for Moore to say that she doesn’t believe in the word ‘transphobia’ is extremely condescending, and seems to structure suffering and oppression into some sort of hierarchy. To deny trans men and women a term to describe the prejudices and hate that they receive is no different to claiming that homophobia, racism or ableism don’t exist, and as a ‘feminist’ surely Moore is more than aware of the importance of being able to claim ownership over terms such as ‘sexism’ and ‘misogyny’. That is not to say that we can’t challenge and be critical of this sort of terminology, my problem with the terms ‘transphobia’ and ‘homophobia’ is the ‘phobia’ part- neither is a phobia, both is a hatred. I can be wary of those terms, without denying that the phenomenon that they describe exist. If Moore's version of feminism is one that denies groups the right to use language to describe their experiences, then hers is a feminism I don't want to be part of.

So, my final thoughts on Moore’s last piece are as follows: she needs to apologise in a way that doesn't say ‘I might have been wrong, but the people who bullied me off twitter were more in the wrong’ – it’s not a competition. She needs to accept that her original ‘Brazilian transsexual’ comment was ill-advised, personally, I could see no malice in it, but I have three issues with it: the first is the use of transsexual as a noun (if she means a trans woman, than say so), the second is the notion that there isn’t a variety of experience, size and shape within the trans community, and the third, which is most pressing, is the insensitivity of the comment, given the alarming rate of trans men and women (particularly women) that are killed each year in Brazil. Was it a malicious comment? Of course not. In poor taste and thoughtless? Definitely. She needs to acknowledge this (as opposed to saying ‘well no one complained about it the first time it was published’). Next, she needs to apologise (with some hint of sincerity) for the subsequent transphobic comments that she made on twitter, which are indefensible, but people will accept an apology. She should also condemn Burchill’s defence of her (if she still doesn’t believe transphobia exists then she should just take another look at her article). She describes this whole situation as a “storm in a double-D cup”, perhaps it was initially, but her dreadful handling of it turned it into a hurricane that exposed some very worrying views about a much-pilloried minority.

I will just say this about why I believe the Observer were right to pull the Burchill article (and subsequently, why the ToryGraph were wrong to repost it). In On Liberty, John Stuart Mill said “If all mankind minus one, were of one opinion, and only one person were of the contrary opinion, mankind would be no more justified in silencing that one person, than he, if he had the power, would be justified in silencing mankind”. Aside from the sexist language that was accepted at the time he wrote this, I believe this still stands true, Burchill might feel that she and Moore are the silenced ones in this situation, but her hate speech sought to actively silence a whole community. I don’t begrudge her the right to hold such insidious views, but she should not be given a platform to do so. It’s not a matter of freedom of speech, it’s a matter of fairness and of the media not facilitating hate speech.

Let’s hope some lessons have been learnt from all of this (not by Burchill obviously, that would be expecting too much).

Hello all, and happy new queer!

Just a quick plug for this event at the London Metropolitan Archives on February 16th, this is the tenth anniversary of the LGBT History, Archives and Culture Conference and boasts a great wealth of speakers. It's happening at the Guildhall Art Gallery, see the programme beneath. Click on the images to enlarge, I hope to see you there! 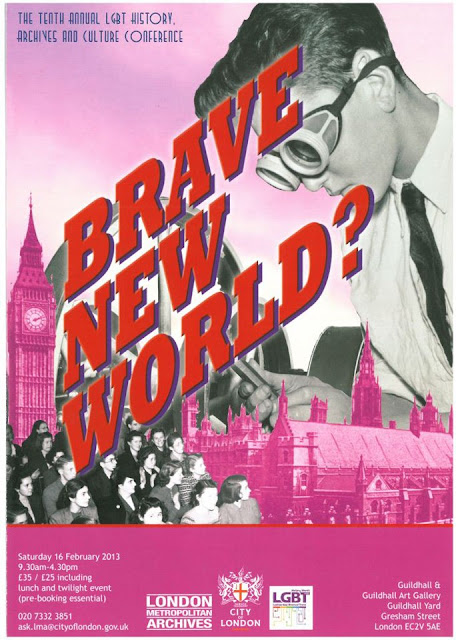 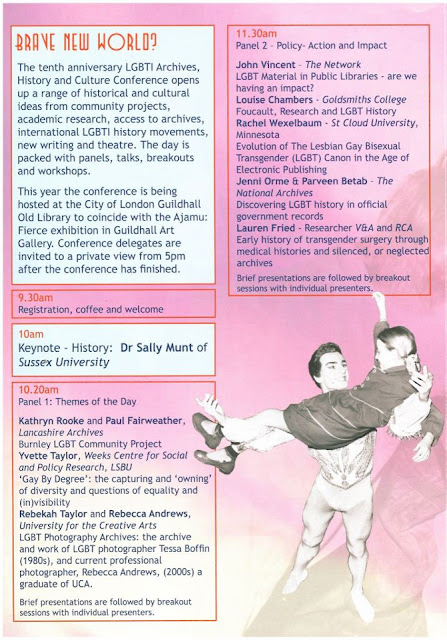 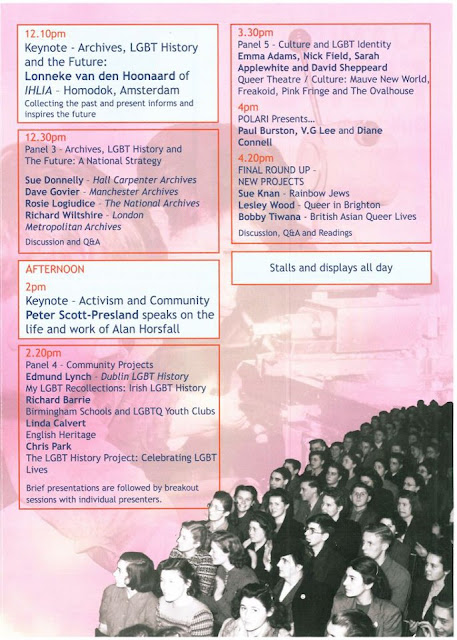 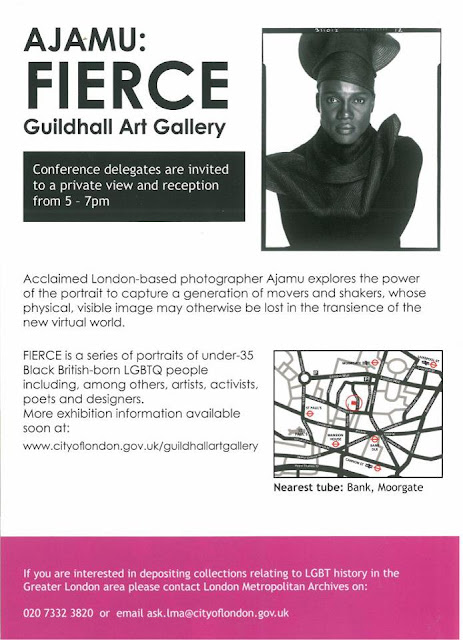