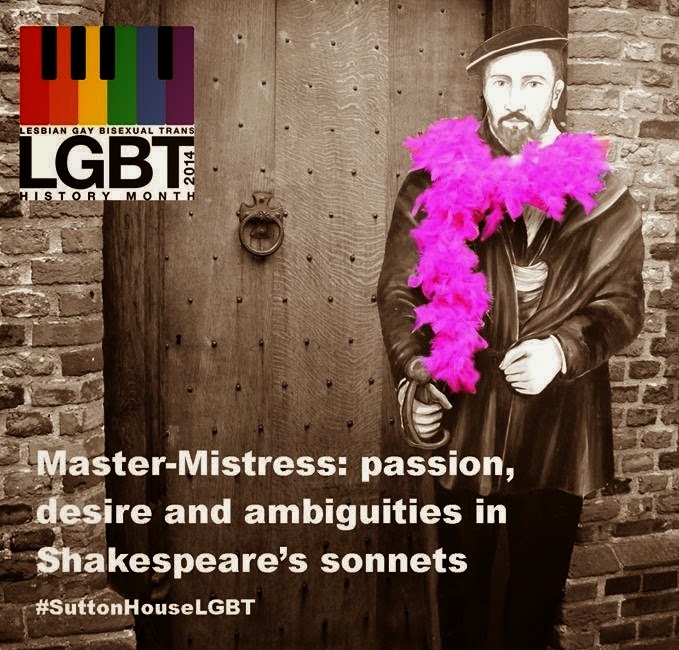 In the Tudor spaces of Sutton House we pose questions about desire, sexuality and gender through readings of four of Shakespeare’s sonnets, originally published in 1609. Shakespeare’s sexuality has often been contested, based largely on the series of sonnets known as the Fair Youth Sonnets (sonnets 1-126), which were seemingly addressed to a man known only as ‘Mr W.H’. It might be that to read these sonnets as an indication of same-sex desire is to see them through a contemporary lens, and therefore not an accurate reading. It might also be true that these sonnets are not autobiographical, and are fictional, in which case, both the speaker and the subject of the sonnets are in question. It is often disputed that Shakespeare had even intended these sonnets to be published. In 1640, publisher John Benson notoriously changed all of the pronouns in the sonnets to suggest that the subject was always a woman, suggesting discomfort with the implied love- platonic or sexual- for another man.

To celebrate LGBT History Month here at Sutton House, we have decided to remove four of the sonnets from their context and present them throughout four of the Tudor rooms by the disembodied voices of people who identify as lesbian, gay, bisexual, trans or queer, alongside artworks by Judith Brocklehurst. By doing so, we hope to raise questions about desire, gender and sexuality. Rather than questioning whether or not Shakespeare would be considered part of the LGBT community in contemporary terms, we instead address the universality of desire and the ambiguities of gender and identities.

You can view a video of the exhibition here:

To accompany Sutton House's first LGBT History Month exhibition 'Master-Mistress: passion, desire and ambiguities in Shakespeare’s sonnets' we held a panel event, and an opportunity to see the exhibition for free.

The discussion was about including lesbian, gay, bisexual, trans and queer narratives in heritage spaces, it was chaired by exhibition curator and National Trust volunteer Sean Curran and featured four experts from the heritage world.

The event can be listened to here: