The first is the 'Museum Futures in an Age of Austerity' conference taking place at the Institute of Education from 14-16 June.

I will be giving my paper on Saturday 15th, it's called:

Fetishising memory: The Holocaust memorial site as gay-cruising ground and the importance of pilgrimage as an affirmative queer experience

The programme is not quite finalised, but keep an eye on the conference webpage over the next few days, you can also buy your ticket for the event there too.

The second is on 27th June 5.30 – 7pm: Room 728, again at the IOE. It is the LGBTQ themed part of the Feminisms, Gender and Sexuality Seminar Series for this term, and I'm delighted to have been asked to present some of my research:

(followed by informal drinks in the Student Union Bar)

About the Feminisms, Gender and Sexuality Seminar Series:

This group is designed for research students and staff to explore their work around feminisms, gender and sexuality. We meet informally about three times a term, twice during lunchtimes and once during the evening; at each session a speaker is invited to reflect upon their ideas as they develop, and to use the discussion space for the exploration of their own questions. Session topics located within diverse disciplines are encouraged. At least one seminar each term addresses LGBTQ (Lesbian, Gay, Bisexual, Trans, Queer) research. The session to be held in the evening will be followed by drinks in the bar.

To book a place at the seminar, contact Annette Braun at a.braun@ioe.ac.uk.

Also, one final point, my MA dissertation is now available for reference use in the IOE library. The dissertations from 2000 onwards are all up on level 5 and arranged alphabetically by author's surname.

Manchester, so much to answer for...

I've just returned from a long weekend in Manchester, which to my surprise I'm finally learning to love, I think it has been bitterness at the assumption that Manchester is the only decent city up North that has fueled this dislike, but I'm beginning to see its charm. 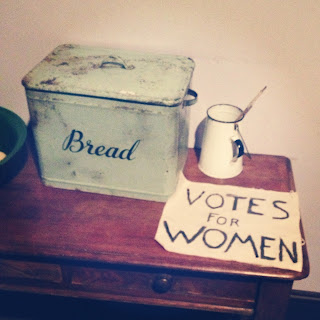 I visited, at the recommendation of my supervisor (and a friend), the People's History Museum, which was an attempt of mine to find a social history museum that inspired me a bit. This one certainly did. Its origins, and the focus on the history of working people, revolution and democracy means that it's an emphatically left-wing museum. It is described as having no political affiliation, though the permanent exhibition essentially feels like it's about victories for the left, and barriers put in place by the right. It seems to me that any attempt at documenting the history of democracy, equality and protesting has to be slanting left-wise, because that's where the change happened. The main exhibition is divided across two floors, with the first part covering the Peterloo massacres in 1819 up until WWI and then from after the war up to present day.

One thing that particularly struck me, aside from the consistent feminist narrative running throughout, was a piece of text on the inside of a door that opened to reveal a pike head, it said: 'Family legend vs historical opinion- is this a Peterloo pike head?' it then goes on 'The accepted history of Peterloo is that the crowd were unarmed. However some historians have suggested that some members of the crowd were armed. The family who donated this pike head had always believed their ancestor John Chadwick collected it from the field of Peterloo. Museums are often given objects with a family history that differs from that of historians. We have to judge which history to tell. Do you think this is a Peterloo pike head? Should we believe that everyone who attended the meeting wanted it to be peaceful.' It is very unusual to find museums that freely admit that they don't have all of the answers, and instead of making a decision here as to whether or not to show an artefact that may not be what it claims to be, they have framed it within a question, not only about the role of the museum, but about the difficulties of piecing together histories, and allowed the visitor agency in making their own mind. A very bold (and simple) move, for a very bold museum.

The exhibition in the temporary space was The Art of Protest, which consisted of protest artworks (of varying quality) that were submitted to NOISEfestival.com. I particularly liked the use of the space, which seemed very community-curated and democratic, and the exhibition was complemented by a programme of events. Situated in the Engine Hall, the Art of Protest was an example of a community driven short term exhibition, and aside from being a great feature for any museum, also upheld the ethos that formed the original museum collections. 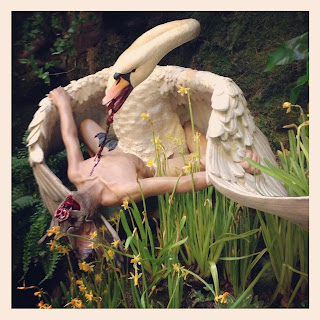 I also popped to the Manchester Art Gallery to see the Raqib Shaw exhibition, and the various interventions he had performed around the museum. I was also delighted to encounter a small exhibition called 'Dreams without frontiers' (which you can read about here), in which I had a near-spiritual experience sitting in a darkened room with 'Asleep' by the Smiths playing and no-one but a woman that looked like Lol from This Is England for company. To accompany the exhibition, a small booklet of essays responding to the works had been commissioned, a piece of art in itself, they had accepted submissions from anyone, and while the quality of the writing varies, it's another example of a democratic use (and extension) of an exhibition.