This was my first ever visit to Amsterdam, and I was bowled over by how queer-friendly it is, the Central Station walls were adorned with huge posters about Pride and almost every canal bridge was lined with Pride flags. London could learn an awful lot from Amsterdam. 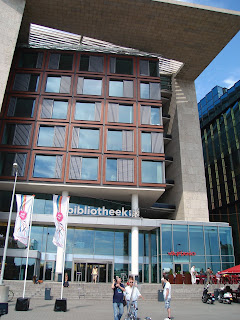 The conference took place in the most beautiful public library I have ever seen. Perhaps the difference between Amsterdam and the UK was most stark because of this, public libraries here are often quite grim, and certainly don't have the money to do anything about it, but this library was huge, clean, stylish, modern and the restaurant on the 7th floor resembled the food hall in Selfridges- but nicer. There was a piano on the ground floor, which seasoned pianists were encouraged to play (with light fingers) and the result was surprisingly unintrusive and only added to the ambience. Jan Pimblett (from London Metropolitan Archives) described the library as 'John Lewis for the brain' which I thought was quite apt. 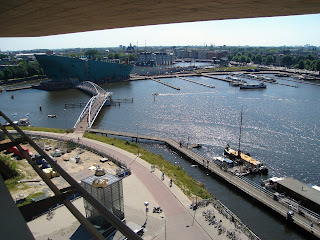 A great feature was on the sixth floor, home of IHLIA, these pink shelves, or 'Rose Kast' represent a project by IHLIA to advocate for a pink collection (LGBT books and films) in every Public Library in the Netherlands. 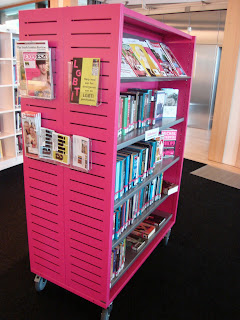 The format of the conference was quite intense, with four keynotes each of the three days and then several ten minute papers followed by breakout sessions to discuss issues raised further. This was a very democratic way of allowing as many speakers to present as possible, and also to allow everyone to hear all of the speakers.

I'm not going to report on all of the papers, as most of them are available on the conference blog , but I will highlight a few of them that stood out for me.

IHLIA, as a collection, was reconstructed following world war two, the original was half self-destroyed and the rest was seized by the Germans. The collection now recieves 300,000 Euros subsidy per year by the Dutch government, and aims to give a face to the emancipation of gay people.

E. G. Crichton, Artist-in-Residence at the GLBT Historical Society in San Francisco shared with us some of the work she had done with the archive collection, and looking at ways art practice and creativity can play a role in archives, how memories can be made tangible. She spoke of a particularly interesting project where she paired living LGBT people with people whose collections lived at the GLBT Historical society and asked them to interpret the material, she also produced portraits where images of the living and the dead were seen together. See more about her work here.

Pawel Leszkowicz spoke of his work curating Ars Homoerotica at the National Museum of Poland, I have heard him speak before at the Tate Modern, I won't say much now, I will dedicate a future  blog post to his work, but you can read his paper here.

James Miller and David DeAngelis spoke about their work with the Pride Library, and the Closet Library collection. Based in Western University in Canada, the Pride Library occupies a dedicated space in the main library. The Closet Library is a collection of gay pulp fiction, found in the basement of a collector whose family did not want his identity to be known, hence the name of the collection. The Library students at the University help with scanning covers and cataloguing the material, more can be found here. PhD student Danielle Cooper has done some really interesting research about the Pride Library as Place for queer people, her full thesis can be found here.

Independent scholar Agnieszka Weseli, who specialises in the history of sexuality, women and queer history, spoke of archives as a tool of social change, and where non-heteronormatives fit into history. She said that history gives the possibility of rebellion, and that famous people are often outed as part of the discourse of patriotism, "deviants" who don't fit squarely with general impressions of sexuality and gender, might be overlooked in this. She is working with a grassroots organisation in Poland, and I look forward to the prospect of collaborating with her in the future.

Angela Brinskele and Jamey Fitzpatrick are doing great work with the Mazer Lesbian Archives at UCLA, they are both so positive and full of innovative ideas for sharing the work they do, by engaging with social networking/media, oral histories and by creating their own merchandise to promote the archives. Their papers are here and here, I hope to get the chance to visit the Mazer archives some time.

Gabriel Khan from GALA in South Africa, presented a fascinating talk about the role of the archive as a vessel for memory, I was particularly interested in this as there were many echoes with my own research for my MA dissertation about women's archive collections. He said that a community archive should be necessarily politicised, and that the archive is a place for unpacking and repackaging memory, where the archivist must be facilitator for this. He also said that memories can't always be captured and instead are experiential, memories and stories can be (and should be) channeled into something positive that helps a community.

Topher Campbell spoke about Rukus! which I was already aware of, he spoke with great passion about an incredibly radical collection, that benefited from being run by himself as an entertainer, and Ajamu X a photographer. I hope to be able to engage with this great collection during my research.

Richard Parkinson from the British Museum was another highlight, but I will write a dedicated blog post about his phenomenal work in the future. It was a real pleasure to meet Richard, and to share ideas in our joint break-out session.

Jan Pimblett, an archives outreach pioneer (and friend) from London Metropolitan Archives spoke passionately about the LGBT History Club at the LMA, I will be posting more about upcoming events on this blog soon.

Suzie Day, a Library school student from Western Australia gave some tips about making school and public libraries more inviting to the LGBTI community even when there is no extra funding available. Many of her ideas were very simple, but would never have occurred to me, she stressed that libraries can provide a service that others can't and used her personal experiences to demonstrate this. Things as simple as having LGBTI related posters and community publications in the library, taking part in Pride and engaging with social networks, would make these environments safer, and more inclusive spaces for queer youngsters. The paper can be found here.

My paper was well recieved, and it was a pleasure to present it to so many experts in the field. It will be available online shortly, I will post on the blog when it is available to be read. As thanks to all of the speakers, IHLIA gave us a pair of same-sex porceline figurines, it's a contemporary twist on the classic Delft blue kissing boy and girl doll, such a great souvenir to take home with me! 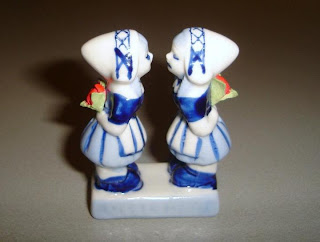