There are two potential strands of LGBT interest that could be developed at Strawberry Hill, taking advantage of the lightness and the weight that this audience group can be approached with. 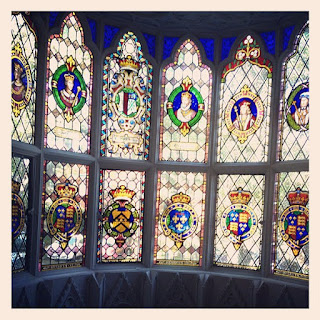 The LGBT and queer heritage of the house is intangible; the challenge is to bring this heritage to the surface. The National Trust, for example, is slowly beginning to embrace more daring ventures to include this audience group, with recent developments at Nyman’s House, where an artist and curator was invited to perform interventions to uncover the story of a gay former resident, and the ‘Soho Stories’ smartphone app, which is a guided audio tour around the popular LGBT-friendly streets of Soho, London.

The first strand is around the idea of social justice. Richard Sandell and others have looked with some depth at the potential museums, galleries and country houses have in reaching out to marginalised or “difficult-to-reach” groups. The Museums Association are currently looking at the idea of the ‘just’ museum, considering social justice at the very core of all institutions do. They are also looking ahead to ‘the museum in 2020’ and at how museum professionals can strive to reach the goal of being inclusive by that time.

There is great value in Strawberry Hill House as place, or as a safe space. In my MA dissertation I looked at how women’s collections in archives can be used for outreach and education and found, through looking at other institutions, particularly at the Women’s Art Library at Goldsmiths, that the library is valued as a space for women, with many groups using it as a base for discussion, workshops and debate. Strawberry Hill could become such a space for LGBT groups. It could be the venue for conferences looking at Horace Walpole’s sexuality (on which George Haggerty, Timothy Mowl and others have written about), queer identity in the 18th century, the queer gothic and queer aesthetic. It could also play home to LGBT books clubs, discussion groups and study days looking at, for example, the potentially homoerotic content of Walpole’s correspondence. Strawberry Hill could celebrate LGBT Pride over summer, sending a strong message that this is an audience group worthy of acknowledging and worthy of celebrating. 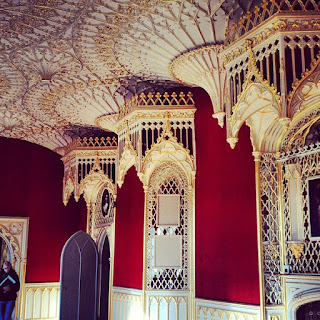 While we cannot assume to know of Walpole’s sexuality, his life and his home unpack and undo notions of heteronormativity and resist normative sexual values, this discussion is one that is worth exploring further.

The second strand is a lighter one, and would explore the kitsch and the camp that is abundant at Strawberry Hill House. Kensington Palace has begun to embrace a more kitsch line of interpretation to complement its kitsch aesthetic, evident in the recent Enchanted Palace exhibition. The theatrical and performative nature of the décor would lend itself to hosting gay youth groups and gay drama performances, as well as short running exhibitions examining the gay themes that currently reside only subliminally in the house. The empty and unfurnished rooms could be interpreted by queer contemporary artists, and the bold and unusual lighting created by the gothic windows and stained glass mean that it would require little to transform the rooms into breathtaking gallery spaces. There is also scope for a queer artist in residence, to help facilitate LGBT community groups (and others) to explore these themes for themselves. Similarly, these themes and ideas could be exploited with fashion and design students, who could look at masculinities, men and fashion and interior design. 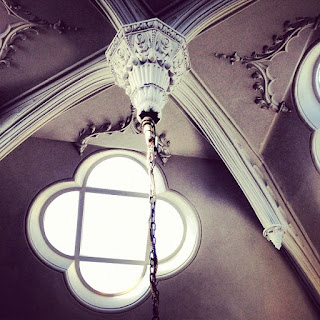 The financial implications of welcoming and embracing an LGBT audience go way beyond the entry charge that new LGBT visitors would bring with them. If an LGBT audience sees that their narratives are valued by Strawberry Hill, the number of Civil Partnerships that the House currently caters for could increase considerably.

For those concerned with the idea that these proposals include the “outing” of Horace Walpole, this is not the case. It is instead a matter of interrogating undercurrent themes and using them to inform a new kind of conversation. Queering a space can be a retrospective form of interpreting that opens up innovative discourses and a reassessment of how inclusive Strawberry House can become.

The pictures were taken by me (with the help of the Instagram app).