Journal of Education in Museums

The newest issue of JEM has just come out (No. 33) and its about advocacy, and contains an article by yours truly, in which I make the case for including queer narratives in museums & heritage sites and addressing LGBT audiences.

There are also articles about building relationships with museums and universities, how to evidence the impact of heritage institutions and arguing the value of cultural learning. There is also a summary of the GEM conference from earlier this year.

The front cover of the journal includes one of Paul Harfleet's Pansy pictures, which I mention in my article, I've written briefly about that project on this blog already. 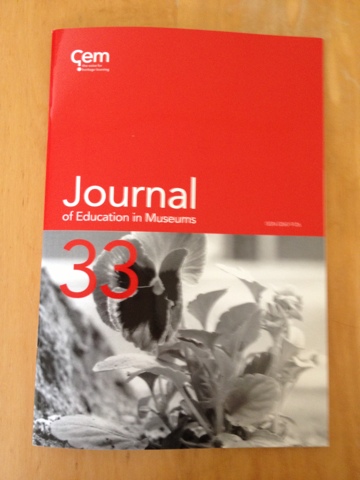 It's a really interesting read, perhaps a bit reductive and stereotyped at times, but it's basically a collection of case studies about collectors/preservationists who are gay men. He identifies patterns in the attributes his subjects possess, namely; gender atypicality, domophilia, romanticism, aestheticism, and connection-and-continuity-mindedness, all of which he explores at some length.

Definitely recommended (though to be read with a pinch of salt at times!) 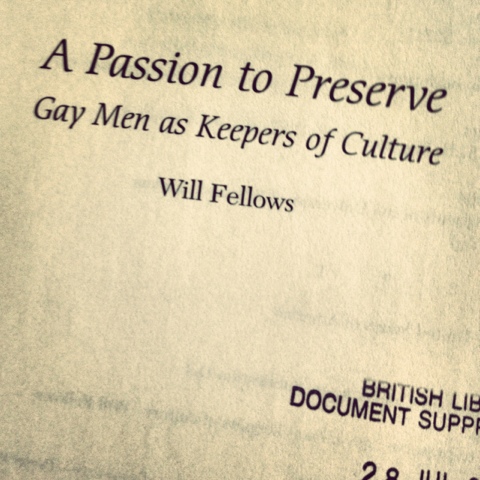 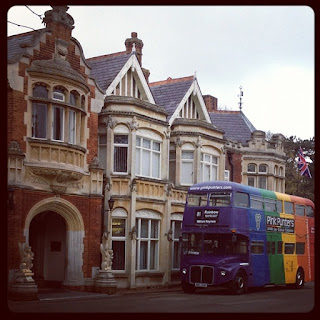 Yesterday I joined Jan Pimblett and others from the London Metropolitan Archives at the LGBT History Month pre-launch event at Bletchley Park. We peopled a stall during the day, and then attended the evening programme of events.

Speakers for the evening included Nigel Tart, who spoke about using LGBT themes in Maths lessons, Elly Barnes (No.1 on the IoS Pink List 2011!) who gave an empowering talk about making schools LGBT friendly and Kirsty Horrocks, a prison officer and member of GALIPS (Gays and Lesbians in the Prison Service), Norwich Pride Choir provided some beautiful entertainment, (including interpretations of coming out stories written in 140 characters!) and ended with a stirring speech by the nephew of Alan Turing, Sir John Dermot Turing. 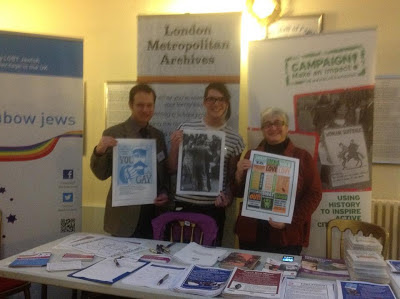 It was a great day, and aside from the enjoyment and community that LGBT History Month provides, a key theme was that primarily, thanks to LGBT History Month, and Schools Out and some of the fantastic pioneers and activists that were present, young lives are being saved.

HELP NEEDED WITH RESEARCH: Hello friends. If you identify as Lesbian, Gay, Bisexual, Transgender or Queer, and collect something (stamps, coins, magazines, jewellery etc. anything!) please take the time to fill out this form to help with my PhD research. There is more information if you follow the link. If not, please share to spread the word, I will be forever grateful!

Thanks to all who have taken part so far. This survey will be running until Friday 23rd November.

THIS SURVEY IS NOW CLOSED - huge thanks to everyone who took part. I will share the results, so keep your eyes on the blog!

I attended the What is LGBT(Q) History and Where do we stand? conference at Queen Mary, University of London on Wednesday 7th-Thursday 8th September. I decided to do a few blog posts, just to make it more digestible, and because my notetaking tends to be a bit scatter-brained and excessive.

My first question before even getting there was why the Q for Queer was in brackets...

Rather than going through each of the papers, I'm just going to pick out some of the points I found most interesting.

You can find out more about the conference here: http://whatislgbtqhistory.blogspot.co.uk/

The first panel was about LGBTQ Narrators and Oral History(/ies)

Jane Traies, a PhD candidate from the University of Sussex spoke about her work with older lesbians and oral history. She said that older lesbians are overlooked in both academia and in popular culture, and the older queer generation is particularly hard to access. She managed to survey around 400 lesbians aged between 60 and 90, and then followed up with 50 indepth life story interviews. She referred to older queer people as "the closeted generation" which was a turn of phrase I like. Oral histories with older people, specifically marginalised people, is about restoring the historical record, and not only treating them as museum pieces with an interesting past, but capturing their experiences of today, the present. One of the questions asked was "do you consider yourself a feminist?", a staggering 80% said yes, which is much higher than any other statistics for 3rd age populations, is it because they are older? is it because they are women? is it because they are lesbians? these are ideas she needs to unpack.Many of the younger women she interviewed (around their 60s) were young during the second wave feminist movement and thus may see feminism and lesbianism as inextricably linked. Those who formed their lesbian identities before the 1960s were less likelyto consider themselves feminists, she also found that those from working class backgrounds were also more likely to consider themselves feminists. Of the non-identifying-feminists, the adoption of butch/femme and mirrored heteronormal roles were more common. Jane's research has confirmed for her that personal histories and identities and socio-political histories are linked and often in conflict. She also said it was important to disaggragate the LGBTQ acronym, but also to knit it back up again.

Of LGBTQ history, she said it was still troublesome to the academy, as it erodes traditional boundaries of histories and is interdisciplinary, and that LGBT histories are a political act and activism. She also identified that LGBTQ history is almost always researched by LGBTQ people, thus bias is unavoidable, and there are some academics that still believe that history can and should be completely unbiased.

She spoke of her methodology, which as an early stage researcher, was of great interest to me. She said that she feels she has a responsibility to the community that she is studying, and has been careful to include them at all stages and has co-produced their life histories and allowed them to choose their own psuedonyms and has consulted them with the transcripts. She also seeks feedback for her research with non-academic LGBT people, which she says is good practice for eliminating academic jargon.

More about her fascinating research can be found here: http://womenlikethat.co.uk/
Elizabeth Young (Uni of Lethbridge, Alberta, Canada) and Alva Traebert (Uni of Edinburgh) were both looking at place in their research, Elizabeth at the 'Bible Belt' of Canada, Lethbridge, and Alva in Scotland from 1980-2000. Ideas that cropped up included; the importance of geography on shaping and informing sexual identities, how this geographic influence impacts oral methodology, the importance of preserving voices, issues of labelling and terminology (which was a theme that cropped up throughout the day and a particular anxiety in my research), the importance of being reflexive researchers who are mindful of ourselves and our own influence and interpretations of the stories that are told.

Alva was looking at AIDs/HIV and how young queer people in Scotland would have educated themselves during the AIDs/HIV crisis without the internet or access to formal education on the subject due to Section 2A (Scotland's version of Section 28 which was repealed three years before the rest of the UK repealed Section 28), the absence of women in queer AIDs/HIV research, apart from as care-givers, how the "scene venues" as viewed by mainstream society are mainly very gendered places (ie: gay bars, parks etc.), the importance of acknowledging the tensions within the community and who polices the boundaries of community membership, the difficulties some lesbians find in being part of the lesbian community due to their femininity (which some of my friends have experienced first hand). She spoke of how she was using queer as an umbrella term for all LGBT people and their allies (which is what I plan to do in my research), but is mindful that it's not a widely embraced term. She sees her role as not giving voices to queer people, but as facilitating queer people to find their own.

She finished by saying that being a queer researcher, working on a queer research project in a traditional university is still a challenge (I have recently faced a sea of blank faces when describing my research to some fellow PhD students at a university that is primarily education and social sciences) and that we need to start thinking about what it means to be a queer researcher.

Some good points cropped up in the Q & A which followed:

-"community" should perhaps be viewed as what we are not, rather than what we are.
- there is a queer generational gap, older queers believe firmly in identity politics (and therefore labels) whereas younger people are more inclined to think of identity as fluid. Jane said that she felt the LGBTQ were not great at intergenerational relationships.
- when doing oral histories, there is no truth. You get the stories that people want to/are prepared to tell and you become the co-producer and the storytelling becomes a conversation.

I'll do a follow up blog post with more from the conference soon.
Posted by Sean at 14:00 No comments: