Stephen Fry's 'Out There'

I've got a bit of a love/hate thing going on with Stephen Fry. I know a lot of people who feel very strongly about him in good and bad ways, and I pretty much agree with them all. I got so annoyed when I read his first autobiography Moab is my washpot, it read to me like public school propaganda, he also infuriated me with the language he used about gay sex, which I'll get onto later. However, his passion in documentaries such as Last Chance to See and his America series was really infectious. I also met him at a book signing for when he wrote a foreword to a collection of Oscar Wilde's short stories, he did a reading from it, which was beautiful, and he was extremely likable. I suppose most people who I know who despise him base this largely on the fact that he purports to be an anti-establishment figure, when he is quite clearly the exact opposite. All this aside, I watched Out There on BBC2 with some interest, hoping it would make up for the laughable BBC3 documentary about being gay in Uganda hosted by Scott Mills of all people.

However, it troubled me in many ways. Obviously, a lot of the stories shared in the documentary were heartbreaking, but it was the way the documentary was framed that I'm focusing on here. I was bothered by the following:


Apologies this is a bit of an incoherent rant, I'm just tired of seeing issues such as these being handled so poorly. I learnt nothing from this documentary, but that's fine, I wasn't the intended audience, I follow queer politics around the world quite closely, but if this show was aimed to educate people, let's not educate them within such troubling and tedious heteronormative parameters. Do I admire Stephen Fry? A little. Do I like him? A lot. Does he speak for my queer community? Absolutely not.
Posted by Sean at 14:53 4 comments:

To celebrate Black History Month, Sutton House, Hackney has an exhibition for October & November called Influential Black Londoners, featuring letters from admirers written to historical Black figures who have helped to shape London and beyond. As part of this, I helped to research three of the figures, the one who captured my imagination the most was Dido Elizabeth Belle. As a taster for the exhibition, I thought I would share my research about her. The exhibition will continue to evolve with the inclusion of art works created by children, so make sure you check it out. 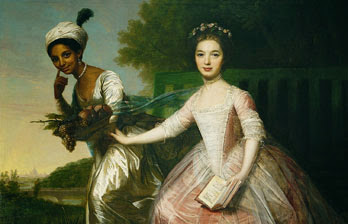 Royal Naval Captain John Lindsay captured a Spanish ship around 1763 and on it met a black slave woman, whose name is unknown. Together they had Dido Elizabeth Belle, named perhaps after the queen of Carthage. What became of her mother is unknown, but Dido was sent to live with her great uncle William Murray, Lord Mansfield at Kenwood House, London, while Lindsay was at sea. Dido was raised alongside her cousin Elizabeth Murray, whose mother had died young and whose father was an Ambassador in Austria and Paris. Life at Kenwood was largely pleasant for Dido, for although she ate her meals alone and was greeted with discomfort, and sometimes hostility from visitors to the house, she had a strong companion in her cousin Elizabeth and was treated with great affection by Lord Mansfield, an affection thought to have played a large part in the Mansfield Ruling of 1772, which decreed that no slave could be taken abroad by force. Dido ran the dairy and poultry yards at Kenwood, and received a handsome allowance, though it was significantly smaller than her cousin’s. In 1785 Elizabeth left Kenwood to marry, and three years later, Dido’s father died, leaving £1000 for her in his will. Lord Mansfield died in 1793 and left her £500, plus £100 per year for life. In his will he confirmed Dido’s freedom, the word ‘confirmed’ suggesting that she had lived her life already as a free person.

The portrait of Dido and her cousin, originally thought to have been painted by Johann Zoffany, but later attributed to an unknown artist, is striking in many ways. In contrast to many earlier portraits, such as Anthony van Dyck’s 1634 painting Princess Henrietta of Lorraine Attended by a Page, and to portraits that followed, including Manet’s Olympia, the black figure in the painting is given an almost equal prominence to their fellow white sitter, and has clearly been rendered with the same care and attention. The unknown artist, whilst ignoring conventions of presenting the black sitter as an accessory for the white sitter, usually denoting status or wealth, still hints at an inequality. Dido is seen pointing to her face, perhaps to highlight the differences in skin colour with her cousin, she is also stood slightly behind Elizabeth, reminding us of the ambivalence of Dido’s role at Kenwood house which fell somewhere between being treated as a proper member of the family, and being treated as a servant. The clothes the two cousins wear are at odds as well, as Dido is exoticised, which may indeed be a way of asserting the status of Elizabeth, especially since accounts of visitors to Kenwood House suggest that Dido dressed in much the same clothes as Elizabeth. Even so, this painting is assumed to have carried a pro-abolitionist message and serves as a reminder that the role of black people in aristocratic families and historic houses, even in the late 18th and early 19th centuries.

Viscountess Weymouth (née Emma McQuiston) has made the news recently for becoming Britain’s first black future marchioness. She married Viscount Weymouth and now lives at Longleat House, an unusual stately home in Wiltshire that includes the first safari park outside of Africa in its grounds. While relishing the traditions bestowed by her newfound title, McQuiston is using her status to help elevate her own brand, as she promotes healthy eating through her recipes and provides beauty tips and advice. Whilst notable for her new title, the Viscountess is just one of many black women and men with a prominent role in the British aristocracy, many others including Dido, have often been overlooked, forgotten or silenced.

In 1794, Dido is thought to have married John Davinier and had three sons, twins Charles and John in 1795, and Edward William in 1800. Dido died just four years later.

The research was overseen by Patrick Vernon OBE and the research was interpreted by Dr Miranda Kaufman. Artist Jane Porter has created a series of beautiful stamps which are dotted around the house and in the exhibition space. The exhibition runs until the end of November.
Posted by Sean at 08:25 No comments: