I attended my first Pride in 2005, just weeks after I had come out. It was in Manchester, and because I was new to the whole thing I saw it for what I then thought it was; a street party. This was also my first experience of Canal Street, which looked much like Queer as Folk had promised it would.

I hadn’t then began to think about my own identity, or at least I didn’t have the vocabulary to, nor had I started to think about where I fit in to Pride, or really about what Pride once was, or could be again. I thought it was expensive, at £15, to walk down a street that was usually publically and freely accessible, and I was annoyed that the club nights were all so expensive, but the weekend became a larger sort of coming out for me, it was the first time I had been ‘out’ with other queer people in the daylight. I met someone who was my age whose mum had come with his nephew in a pushchair. She came every year and loved it. This solidarity was, perhaps, my first subtle glimpse that Pride might actually be about something more, something bigger. I was handed a free porn DVD by a muscular man in a thong.

That evening we soon found out that all of the club nights that we had in mind were sold out, so we went to the only lesbian night, which was woefully under attended. They had a no-man policy, but naturally they didn’t batter an eyelid as I entered. My friend, the only other male in the group was allowed in after some bartering. It was a good night, a nice (albeit modest) crowd, but it felt very much removed from the rest of the activity of Canal Street that weekend. Another hint of something wrong about Pride.

The following year, me and a different friend attended Manchester Pride again. It was more expensive than the previous year, and I was heckled on Canal Street several times for being a ‘fucking goth’ or a ‘fucking emo’. It seemed an emphatically less safe space this year, since I had started wearing makeup. Another problem.

Since moving to London I’ve attended Pride four times. I’ve watched the march only once and usually my attendance has consisted of drinking shop-bought booze on a curb with friends. I feel like I can’t criticise Pride in the way that perhaps I know I should, because it would be hypocritical. I’m complicit in its flaws, I don’t march, I don’t help. Pride, for me, has become annual event where me and my friends drink in the street and have a lovely time. Nothing more. I am part of a complacent and lazy generation. We know where Pride’s roots lie, we know how embarrassing Pride has become, but inspite of this, we still find being allowed to be obnoxiously queer en mass in a public space extremely refreshing. The words ‘being allowed to’ are another problem.

This year, Pride was a last minute decision for me. Having just returned from a trip to Taiwan at 7am that morning I decided to cheat jetlag by joining my friends in our usual spot on a curb by Soho Square.

I broke tradition this year slightly by going to the ‘main stage’ in Trafalgar Square first, mainly to see the wonderful Conchita Wurst perform. The queues to get into the make-shift boxed-in arena were waves upon waves of umbrellas, and the fences around the arena were sheathed with giant adverts from selfless companies such as Barclays and ASDA. When rightly disgruntled folk began to pull down the adverts to see the stage they were quickly re-erected by the security. The theme of this year’s Pride was FREEDOM. 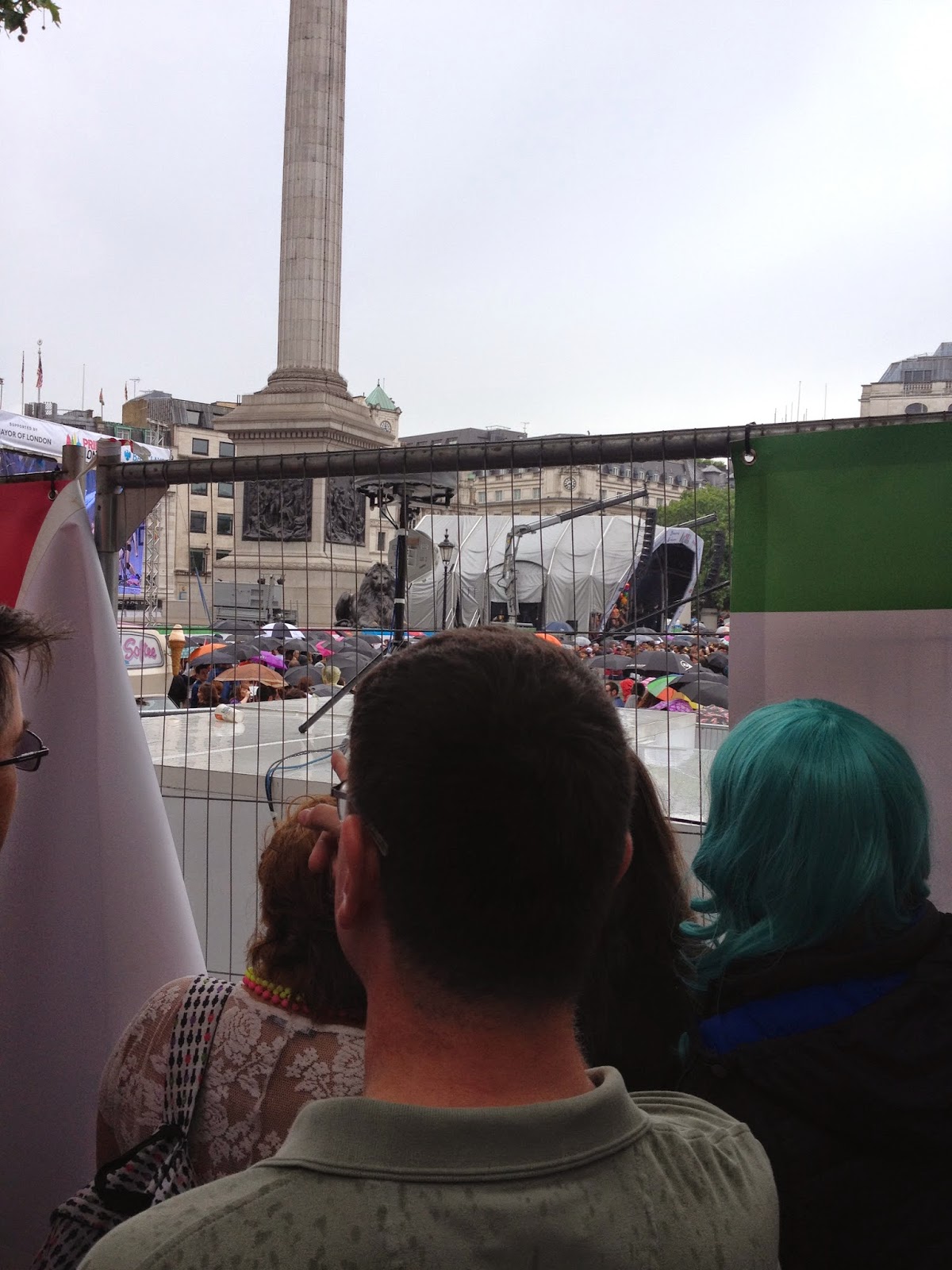 This picture captures Pride this year for me, a peeled back advert that prevented people from seeing a free event. Our view was literally masked by corporate sponsorship. The excessive crowd control for such a peaceful gathering was absurd, and everyone, even the security, could see that.

With sharpened elbows, we did get in. And after enduring a set from Sam Fox (whose set proved that no crowd are more forgiving of mediocrity than the queers), Conchita arrived. I was left with a real sour taste at the ‘banter’ between performances from several DJs, Antony Cotton (who in spite of playing the most visibly gay character in Coronation Street, manages to be the least queer of an otherwise deliciously queer soap) and Ian McKellan. While the sentiments from these folk were sort of blandly heartwarming, they all spoke only about (and to, and for) gay men.

Ultimately, what distresses me most about Pride, above the sinister corporate soullessness, is its misogyny, and ignorance of trans issues. Gay men are arguably the most privileged of a still pilloried community. A community that is sadly very fractured. Unsurprisingly, the trans community have responded to this by creating a more activism-focused Pride event in Brighton, and likewise, an annual Dyke March for the lesbian community and its supporters now exists. It seems to me that the trans, bi and lesbian communities are not really welcome at London Pride, and if they are it’s as an aside or a footnote. The trans community were integral not just in the stonewall riots in the US, but in countless battles for LGBTQ rights in the UK, our lesbian sisters are still underrepresented and misunderstood in ways that, on the whole, gay men (specifically in London) are not. Lest we forget that queer women were at the forefront of providing support, blood and their angry voices during the AIDs crisis in the 1980s, 90s and beyond.

I don’t know how these problems can be resolved, but until they are, London Pride will always be an uncomfortable and embarrassing affair. I will always be a staunch supporter of Pride, even if I’ve never seen it work well as an event that combines anger and activism with love and celebration. But why do I, like so many others, feel like I can complain about it when I’ve never marched? when I’ve never done anything about it? I’m part of a generation of lazy armchair activists whose anger at the keyboard is never realised as it should be in the flesh.

What can we do? How can we restore a sense of pride in Pride?

Answers on a beermat please.
Posted by Sean at 04:27 3 comments:

Museums and Education in the 21st Century: global and local discourses

In a few weeks I will be speaking at a conference in Taipei, Taiwan called 'Museums and Education in the 21st Century: global and local discourses'. This international conference will be convened by the Institute of Education and National Taiwan Normal University. The themes of the conference are based on the intersection between education in its broadest sense and "self-conscious‟ public museums as sites for social interaction, places of collision and possibility. Such sites move beyond the physical museum to embrace social media and the virtual museum. In particular this conference will seek a better understanding of the implications and contradictions of local and global changes for a rapidly expanding museum world.

I will be giving a paper entitled 'Master-Mistress: queer uncertainties in historic houses', on a panel alongside LIN Ching Chiu and WU Dai Rong: 'Embracing and Empowering Urban Youth: Social Relations, Social Responsibility and the Educational Roles of Museum' and Hyunsoo KOH: 'Comfort for Whom? Representation of ‘comfort women’ issue in Museum of Women’s Human Rights'. You can see the full programme here and more information about the conference here.

I'm really looking forward to it, there looks to be a really interesting cross-section of papers, and I'm excited to visit Asia for the first time! I'll blog about the conference and about Taiwan once I return.
Posted by Sean at 09:00 No comments: