"Get your acorns out!" - the National Trust at Pride

I've finally handed a full version of my thesis to my supervisors, so hopefully will have more time to blog, and I'm also planning on making the blog a bit nicer too, and adding more info about the exhibitions we've had at Sutton House this year. 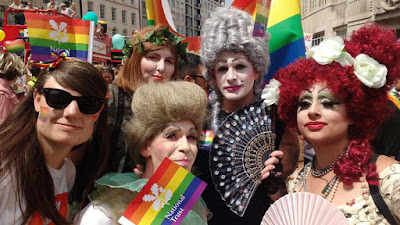 This week has been a pretty unusual week for me at work. On Wednesday we hosted a member's event at Sutton House hosted by National Trust Director Helen Ghosh. I was delighted to be asked to chair the panel event, and the discussion was around making the Trust more diverse and inclusive. On Saturday, the Sutton House team led the National Trust's presence at Pride in London. If you'd have told me when I started researching and volunteering for the Trust in 2013 that either of these things were happening I'd have guffawed. It seems a very appropriate way to bookend the uphill struggle that has been my relationship with the Trust (and frustrations with the heritage world more broadly), and my PhD. 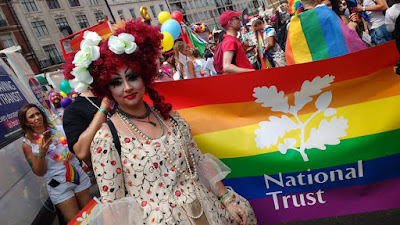 I've ranted on here before about how problematic I find Pride, and haven't attended for the past few years, opting instead for Queer Picnic, Black Pride or Trans Pride in Brighton, all of which embody what Pride events should feel like for me much more than London Pride. 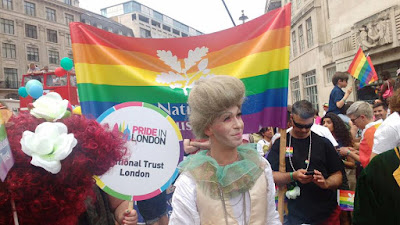 I hate that Pride now presents an opportunity for institutions to stick a rainbow flag on themselves and be seen to be visibly supportive of a community they do shit all to support all year round. I hate that the organisers so consistently get everything wrong (as an aside I attended a winter club night they did at Scala and they had a men's queue and a woman's queue... yet they claim to be for the whole LGBTQ community...). I hated that a police man came up to me this year to ask for a selfie, I said no, and that he could have a selfie for every time the police have appropriately dealt with a hate crime I've reported... Pride is too corporate, too white, too cis, too homonormative, pats people and institutions on the back too much for being "allies" but for not actually doing anything, is hypocritical and blind to the genuine pressing issues that queer communities face around the country and the world. 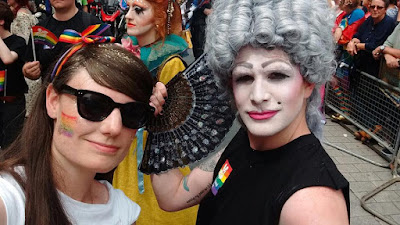 So it was with a lot of anxieties and doubt that I agreed to march in Pride for the first time, and especially to march as part of a huge organisation. But I'm actually pleased I did. The Trust haven't always got it right this year when dealing with LGBTQ histories as part of the Prejudice and Pride programme, but I know that those who worked on it, and helped put together the Pride march are all coming from the same place as me. When we were first talking about Pride, I said I wouldn't be involved if we were selling memberships on the day- as I think it would be desperately inappropriate to do so. Instead, our presence should be to show support, to celebrate the work we have done over the last few years (especially at Sutton House!) and to celebrate our LGBTQ staff and volunteers.

This year at Sutton House, all of our programming has been related to LGBTQ themes. We have worked with (and paid!) exclusively LGBTQ artists, have given platforms to people that otherwise wouldn't have had them from the Sutton House community (such as Victor Zagon, who I will blog about more fully at some point!), we've worked with a young LGBTQ support group, we have explored queer themes with school groups and in our family offers. My exhibition Master-Mistress in 2014 was the first ever LGBT History Month exhibition in a National Trust property, we were the first to launch gender neutral toilets, we've been hosting queer club nights with Amy Grimehouse and Late Night Library Club for years, and I know that we won't stop just because the Prejudice and Pride programme ends. I'm very concerned about legacy, but for now, I was very proud to march as part of Sutton House in Pride, I have worked very hard to help educate a large organisation about LGBTQ heritage, I have called out staff in the Trust when they have got things wrong, and just because the Trust are now on the cusp of progress, I won't stop doing either of those things. 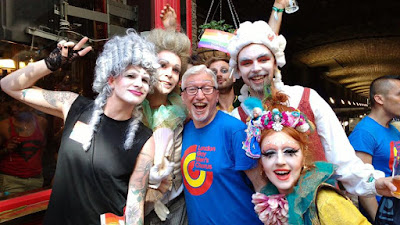 I love the National Trust, that's why I've spent over four years researching and writing about it, that's why I volunteered with them, and why I'm so pleased to have a job at my favourite National Trust house. Marching in Pride also made me realise how much affection my community has for the Trust too, even if sometimes it seems very conservative, or inaccessible, people appreciate the aims of Europe's largest conservation charity, and recognise our attempts to get better. Fear not- I will continue to hold the Trust to account and work with my equally passionate colleagues to ensure that this is just the beginning of making the Trust a better place for EVERYONE.

We met a lovely man called Martin from the London Gay Men's Chorus, who had been part of the Save Sutton House Campaign back in the late 1980s- I'm looking forward to getting in touch with him to start recording his memories, some of which we were lucky enough to hear over a pint after the march. 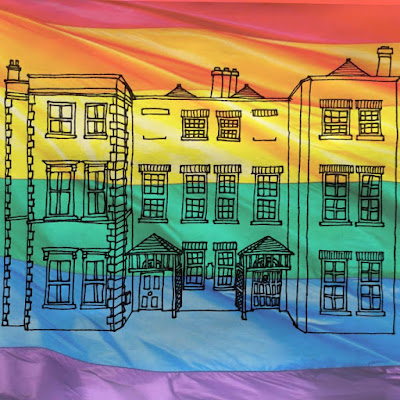 Also: huge shoutout to the man in the crowd that shouted "Get your acorns out!" as we marched past.
Posted by Sean at 14:41 1 comment: