Less than a week to go until my first curating venture opens... myself and artist Judith Brocklehurst set it up earlier this week and everything is looking and sounding great. I'm really excited to see what people make of it, and I hope the visitors will leave feedback, as aside from curating this exhibition as part of my volunteering at Sutton House, it will also form one of three practice led case studies for my research.

See below the 'e-flyer' for the exhibition and events to accompany it. There's also a little teaser picture of one of the artworks. I'll post more pictures once the exhibition is open, and write a post about the event on the 13th too, which I'm hoping will be a really interesting debate. 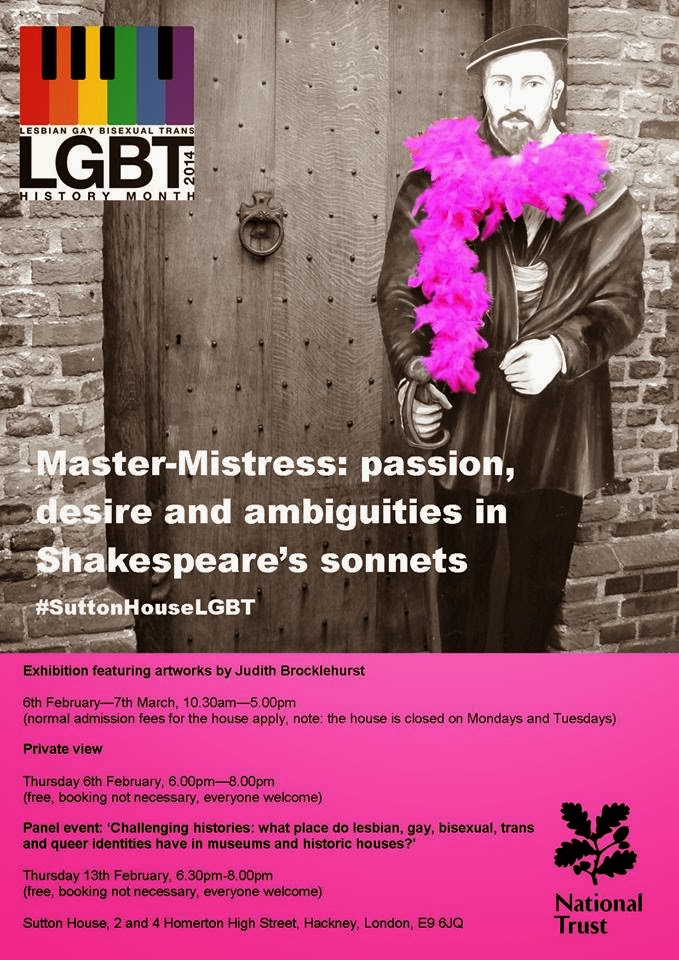 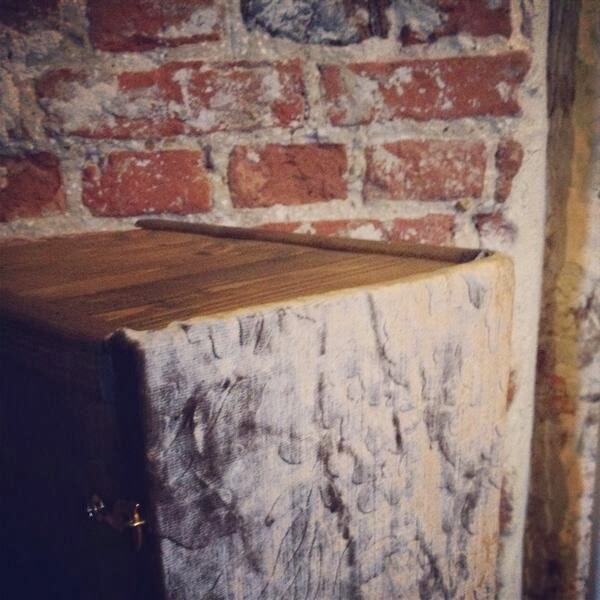 More details about the exhibition and event can be found on the LGBT History Month calendar. And the facebook events are here and here.
Posted by Sean at 07:07 No comments:

Notes on 'Notes on Neo-Camp' 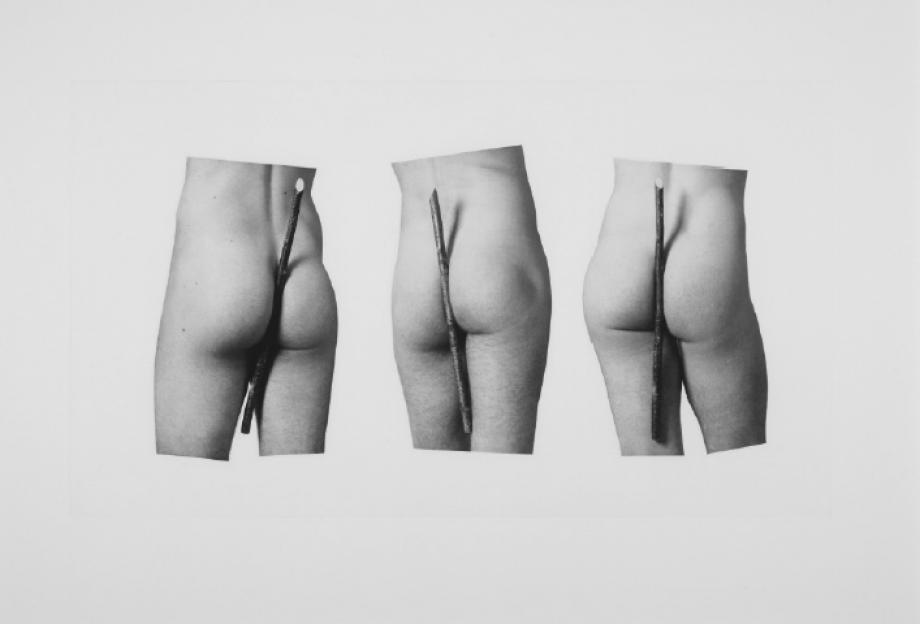 Last night I attended a panel discussion called 'Notes on Camp' at the ICA, which aimed to 'interrogate the term camp and consider its relevance to contemporary art'. Oddly enough, it seemed that the focus of the discussion was actually the term neo-camp - a rather muddy term coined by curator of 'Notes on Neo-Camp', Chris Sharp. It was this confusion over the attempt to revise, reclaim or reimagine the already heavily contested term camp that caused a lot of discomfort for me.

The panel was chaired by the brilliant Gavin Butt, whose work I find really challenging and interesting. The panellists were: Chris Sharp, who, following a rather exhausting article about so called neo-camp, curated the exhibition 'Notes on Neo-Camp'; Daniel Sinsel, whose artworks were included in the exhibition; and Ellen Feiss, who had reviewed the exhibition.

In homage to Sontag's Notes on Camp (and through laziness) I'll put my thoughts about the event in note form.

1. Gavin Butt's interpretation of camp was the only one that echoed my own, he said that camp was an answer to "straight seriousness", for when sincerity was not enough. He highlighted three key changes that have occurred post-Sontag's seminal essay; when written, pop culture as we now know it was in its infancy, now sincere speech is not taken at face value in the age of political spin, ideologies are no longer so readily believed or unchallenged; he referred to "come dine with me" syndrome- i.e.: the way that "trashy consumerist taste" now dominates in ways that it didn't in the early to mid 1960s; and finally, LGBT political and legal developments- meaning that (arguably) LGBT people no longer need to find a place in society solely through irony and aestheticism.

2. Both Chris and Dan's interpretation of 'neo-camp' was to do with the covert, the unspoken, the euphemism and the suggestive gesture; some sort of coded language. They both seemed to identify camp as solely the territory of the gay male- which I find quite a difficult thing to get on board with. Ellen criticised the exhibition as being under-theorised in the context of camp, and Sontag's essay- which all three seemed to be quite dismissive of, and Chris in particular seemed to suggest was not relevant anymore.

3. While I agreed with a lot of Ellen's critique of the term 'neo-camp', the examples she gave to endorse her own reading of camp were equally troubling, there were a lot of erect penises and imagery of queer activism. The heavy focus on (homo)erotica I found quite unusual, it's not camp. Likewise, the political elements of camp (which Sontag refutes by suggesting that camp is apolitical - presumably in the sense that its aim is never to be political, regardless of whether the outcome is or not) for me, are only a small part of what camp is, and the focus on queerness (read "white gay men") was completely misguided. Women, queer or otherwise, were barely a footnote in this discussion.

4. Ellen highlighted an image of an object (if memory serves it was a ladder) that was rendered functionless because of the way it was arranged - she identified this as camp. This is one of many examples where queer (or queered) art works were misdiagnosed as camp (or neo-camp).

5. There was a lot of talk about us living in a "post-marriage" queer time. And a post queers in the military time. Chris identified neo-camp as being post-closet, but it seems to be that neo-camp is indeed post-camp, in other words, a product of assimilation. Assimilation that I feel is thoroughly un-queer and the realm of a tediously homonormative approach to LGBT politics.

6. Dan and Chris both suggested that, the very fact that ICA was having this discussion showed that camp has become institutionalised, I think this talk proved quite the opposite- that camp has been tamed, sanitised and diluted into a completely different, less exciting (/comprehensible) beast, for the purpose of academia and visual art.

7. The strongest comment, for me, came from a woman in the audience, who said that 'camp is female'. This comment aside, there was no mention of the role women have played in the story of camp. (I recommend Pamela Robertson's Guilty Pleasures: feminist camp from Mae West to Madonna as a good counter to this).

8. While a very interesting discussion, the fact that Chris Sharp's exhibition (and thus, by proxy, Daniel Sinsel's work) had been framed as 'neo-camp', made it difficult to engage wholly with any aspect of it, as a great deal of their images seemed to me, the very antithesis of camp. Thankfully, Gavin Butt in his closing remarks, admitted that many of the images shown throughout the talk had prompted the reaction 'I don't think that's camp at all' from himself.

9. Without having seen the exhibition, it's unfair to be dismissive of it, but based on this discussion, Neo-Camp seems to me to be straight, highbrow, abstract and thoroughly un-camp. I'm not sure I can even imagine what a "new" camp might look like, or even if this body of work could be called post-camp- it seems to me that 'anti-camp' is a more appropriate term.

10. As my friend Judith, who I attended the talk with, said; perhaps once you start theorising camp, you kill it. However, I'm sure that won't stop us trying...
Posted by Sean at 08:32 No comments:

In the Tudor spaces of Sutton House we pose questions about desire, sexuality and gender through readings of four of Shakespeare’s sonnets, originally published in 1609. Shakespeare’s sexuality has often been contested, based largely on the series of sonnets known as the Fair Youth Sonnets (sonnets 1-126), which were seemingly addressed to a man known only as ‘Mr W.H’. It might be that to read these sonnets as an indication of same-sex desire is to see them through a contemporary lens, and therefore not an accurate reading. It might also be true that these sonnets are not autobiographical, and are fictional, in which case, both the speaker and the subject of the sonnets are in question. It is often disputed that Shakespeare had even intended these sonnets to be published. In 1640, publisher John Benson notoriously changed all of the pronouns in the sonnets to suggest that the subject was always a woman, suggesting discomfort with the implied love- platonic or sexual- for another man.

To celebrate LGBT History Month here at Sutton House, we have decided to remove four of the sonnets from their context and present them throughout four of the Tudor rooms by the disembodied voices of people who identify as lesbian, gay, bisexual, trans or queer, alongside artworks by Judith Brocklehurst. By doing so, we hope to raise questions about desire, gender and sexuality. Rather than questioning whether or not Shakespeare would be considered part of the LGBT community in contemporary terms, we instead address the universality of desire and the ambiguities of gender and identities.

Note: the house is not open on Mondays and Tuesdays for the duration of the exhibition.

The exhibition will be accompanied by a free event:

To accompany Sutton House's first LGBT History Month exhibition 'Master-Mistress: passion, desire and ambiguities in Shakespeare’s sonnets' we are holding a panel event, and an opportunity to see the exhibition for free.

Join us for an exciting discussion about including lesbian, gay, bisexual, trans and queer narratives in heritage spaces, chaired by exhibition curator and National Trust volunteer Sean Curran and featuring four experts from the heritage world. The evening will also be a chance to see the exhibition beforehand.

For information about this, and many other great events throughout history month and beyond, visit the events calendar.