'Tools of the Trade' event report

Tools of the Trade: Historical Textbooks and other Teaching and Learning Resources
The 2013 Friends of Newsam Library and Archives study day

Just thought I would briefly report on the IOE Friends of the Library and Archives study day that I organised with Becky Webster's help.

On Wednesday 6th of February, our annual study day, sponsored by the Friends of the Newsam Library and Archives took place. The inspiration for the theme of the day was the rich historical textbook collections held by the library and recent and current projects to catalogue the geography, history, science and technology textbooks. The day began with a brief overview of the archive collections by Deputy Archivist Becky Webster, followed by Dr Toby Simpson, the Learning and Engagement Manager from The Wiener Library, who gave an illuminating and shocking talk about how German children were taught Nazi values through propaganda in textbooks from 1933-1945, which had been the subject of a recent exhibition at the Wiener. We are very fortunate here at the Institute of Education to be within walking distance of such a rich collection with a profoundly important history, not to mention a beautiful reading room and expert staff. Next, Nazlin Bhimani and Antony Daws from the IOE Library spoke about the historical textbooks collection and supporting research, and the history of the Inner London Education Authority (ILEA) and its resources respectively. After lunch, Bernard Barker recounted his experiences as a history teacher in the 1970s, and the controversy surrounding his innovative and inspirational teaching style. Bernard’s latest book (due in January 2014) is 'Education and Social Mobility: Dreams of Success'. The final slot of the day was occupied by two current MPhil/PhD students from the IOE, Alice Kirke and myself, both of us received AHRC funding for our research.  Alice, an education historian, spoke about landscape and the environment in the history of education, looking specifically at the contested understandings and practices of rural education. I spoke about my research with the National Union of Women Teachers (NUWT) collection in the IOE Archives and looked at case studies of how women’s archive collections can be used effectively in outreach and education. The day ended with a showcase of many of the archive and library collections that were mentioned throughout the event. The study day was well attended and generated lots of interesting questions, discussions and debate. A huge thank you to everyone who attended, and special thanks to the speakers. We look forward to embarking on the planning of the 2014 study day!

You can find out more about the Friends group here.
Posted by Sean at 07:14 No comments:

Just a quick plug for a 3 day conference at the IOE in June.

Museum Futures in an Age of Austerity is a three day conference in central London. It brings together a diverse range of speakers to discuss the massive changes in practice, philosophy and policy that present both challenges and opportunities for the museum and its publics. This conference also celebrates 20 years of the IOE MA Programme: Museums and Galleries in Education.

The Call for papers includes the following themes:

There is more information, including a breakdown of the themes here.
Posted by Sean at 08:20 No comments:

Firstly, I must apologise for how long it has been since I have updated the blog, LGBT History Month was manic, and alongside writing a chapter about queer oral histories and a little trip to Paris I have barely had time to formulate my thoughts, let alone write them down.

Just a quick blog post to thank everyone who came to my talk last Wednesday about Queer Collecting at the London Metropolitan Archives, and of course to Jan at LMA for allowing me to share my research, and to Howard for facilitating the evening.

As always, the LMA LGBT History Club served as a great forum to share ideas and to generate discussion, and also as an opportunity to run my research-in-progress past people who aren't my supervisors, which is a really valuable exercise for any research students. 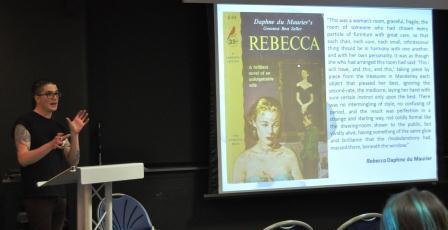 I always like to use literature in my research, and this talk was no different, it was named after a quote from Utz by Bruce Chatwin 'The right and the need to touch', and I also mentioned Daphne du Maurier's Rebecca, when talking about taste and gender. The quote I referred to was from when the protagonist Mrs de Winter is describing Rebecca's morning room, which she describes as "a woman's room" (you can see a picture of me gesticulating wildly about it above), the quote is as follows:

“This was a woman’s room, graceful, fragile, the room of someone who had chosen every particle of furniture with great care, so that each chair, each vase, each small, infinitesimal thing should be in harmony with one another, and with her own personality. It was as though she who had arranged this room had said: 'This I will have, and this, and this,' taking piece by piece from the treasures in Manderley each object that pleased her best, ignoring the second-rate, the mediocre, laying her hand with sure certain instinct only upon the best. There was no intermingling of style, no confusing of period, and the result was perfection in a strange and starling way, not coldly formal like the drawing-room shown to the public, but vividly alive, having something of the same glow and brilliance that the rhododendrons had, massed there, beneath the window.”

This provided an interesting starting point to looking at the gendered nature of taste and of collecting, and I elaborated by looking more closely at the research of Susan Pearce, Belk and Wallendorf (some references beneath). I then argued that collecting was a queer act, that required a collector to be gender atypical in behaviour and ended by looking at the survey I conducted with over 60 LGBTQ identified people who owned collections.

I wanted to show a video clip of a documentary called Signs of the Times from the early 90s, but unfortunately it wouldn't work. It's very camp and funny, so I thought I would share it here.

Thanks again to everyone who came along, I hope it was useful/interesting/thought provoking/mildly amusing. I will be updating the blog more over the coming days as I have a lot to report back on, including the LMA LGBT conference which was a great success, a recent meeting with Surat Knan of Rainbow Jews, the IOE LGBTQ & Friends group and the events we held for LGBT history month and more!