Hello all, sorry for the radio silence, been a bit busy. I thought I'd share some brief thoughts about my visit to New York, which was amazing (but feels like a million years ago now...)

A few bits of news before I do:
That's enough of that. On to New York.

Myself and Lauren Windham presented a workshop together on the first day of this conference. Initially, it was to be a three person panel, but Ellie Lewis-Nunes was unfortunately unable to make it (I'm hiking with her to raise money for Macmillan Cancer Support, you can donate here!), so while it was bitter sweet, the talk was still a great success. Our workshop was called 'Addressing the balance' and we spoke about challenges arising when addressing specific community groups in historic buildings in London, and how this can extend to the regular visitor. I spoke about my work with Sutton House, and Lauren spoke about her time at Bruce Castle, and a project she ran with children and their non-English speaking parents. We had some really great questions, and people seemed really engaged with the subject.

We had a quick chance to poke around the new wing of the museum, and we were blown away. I must admit my expectations of glass museums are based on the one in my hometown of Sunderland, which may be great now, but when I visited it a very long time ago, it was a little dry. This new wing was spectacular, a huge array of really challenging contemporary glasswork in a beautiful naturally lit space, it really was breathtaking. 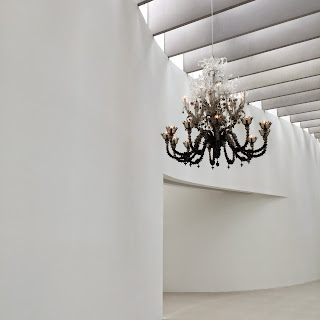 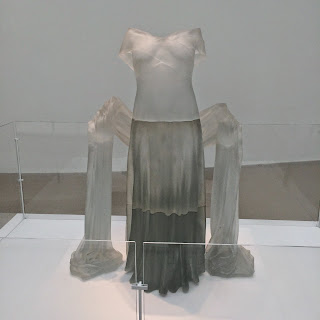 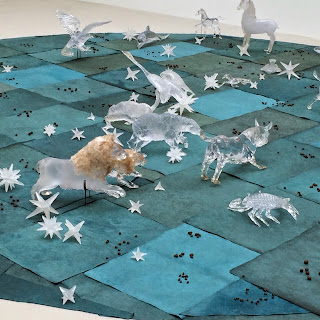 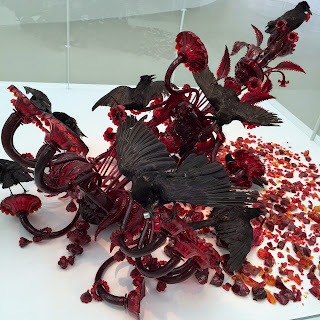 I am a huge Bjork fan, like worryingly huge. I have her words tattooed on my flesh (as well as the swan from Vespertine) and I've seen her live 6 times now (7 in July!), she truly is my idol and this exhibition felt like a pilgrimage for me. Four of her instruments, which I'd previously seen live on her Biophilia tour, were dotted around the museum atrium and removed from their natural context, it became even more clear what beautiful works of art they are, especially the pendulum harp. 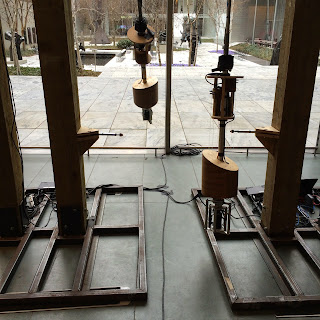 The first part of the exhibition was an immersive screening of the MOMA commissioned video for Black Lake, which is the centrepiece of her new album Vulnicura. At ten minutes long, Black Lake is sparse and heartbreaking, probably Bjork's most personal and vulnerable song to date. The video is understated, it features her walking around barefoot in the inside of a volcano, and only in the final minute or so does she surface to the moonlike mossy Iceland surface. The video is projected on two walls that are often in sync, but often show different things, and the small space they were played in was made to recreate the inside of a volcano, with crater-like protrusions lining the wall. The room had nearly 50 speakers, and we saw the film twice (I cried both times haha), the first time, everyone was sitting on the floor, which I thought was weird, and the second time, people stood and moved around the space. There's a particular moment in the film during a long 30 second drawn out note from the strings, where Bjork, on her knees, pounds violently at her chest as if she is trying to restart her heart. I glanced around and it was really moving to see so many glistening eyes reflected from the glow of the screen. For me, if you can't see an artist live, surely this is the ideal way to experience music, it was a staggering achievement. 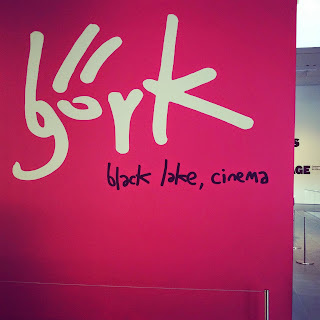 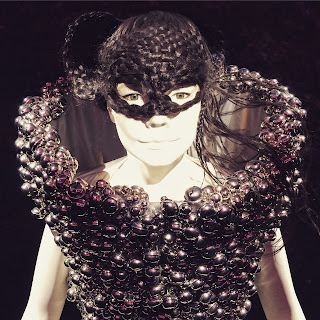 The next part was the Bjork cinema, a room filled with red velvet cushions to lay on where they play all of Bjork's music videos in chronological order. We spent about 40 minutes in there, I have seen all of those videos countless times, but it was a whole new experience to see them in this setting. 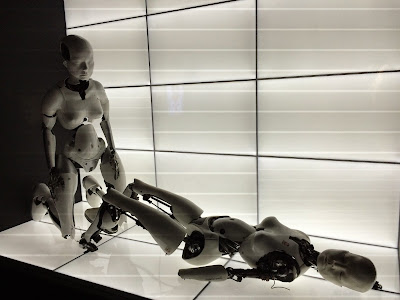 The final part was the timed-ticket section called 'Songlines', in which a fictional story about a woman moving through the albums of Bjork is whispered in your ears alongside snippets of her songs. It was a really creative and unusual way of telling the story of Bjork's music, and of the strongly defined characters she creates for each of her albums. In each room, which corresponded to an album, were costumes and props from videos and live performances and Bjork's notebooks.

The exhibition completely lived up to my expectations, and the Black Lake screening in particular completely surpassed it. I'm not sure I'll ever love an exhibition as much as I loved this one, it truly felt like a religious experience. 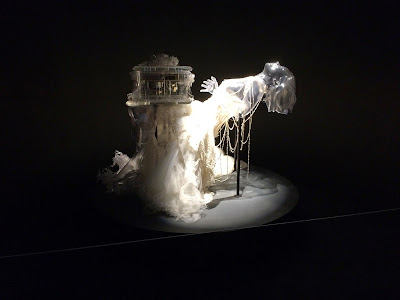 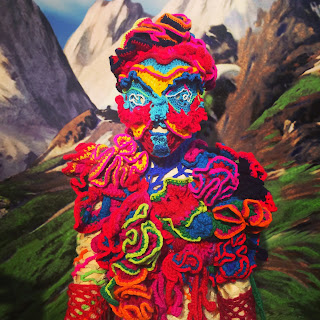 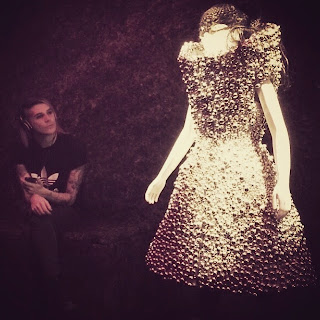 (here's me gazing lovingly at the bell dress from the Who Is It? video)

Lauren left to go back to Washington, it was really great to catch up with her after so long (she and I studied on our MA together), she is one of my heritage idols and a continued source of inspiration to me. I had a day on my own before my housemate arrived to stay for a week, so I went to see the 9/11 Memorial Museum. I was expecting it to be problematic to be honest, I imagined it would be extremely patriotic and Islamophobic, but I was very pleasantly surprised at how tasteful and moving it was, it was purely a commemoration of those lost in the attacks, and the interpretation combined stark monuments, rich and compassionate storytelling, and some really visually powerful moments (especially the missing posters that were projected onto one of the walls and gradually faded in and out). The fountains themselves were really beautiful too. 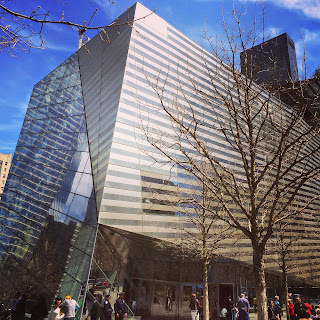 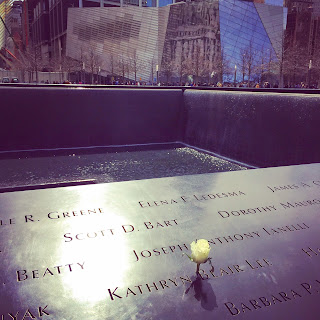 Two really interesting points (from a museum studies student perspective...); firstly, there was a recording studio for visitors to record their memories and thoughts about the day, these were then projected onto a long screen and was really beautifully done. Secondly, I've never experienced such a raw and solemn audience before, I'm a terrible eavesdropper in museums, as I think it's a good lazy research tool, but in this museum the conversations were much more personal than usual, everyone remembers where they were that day, and everyone was very visibly moved and at times uncomfortable. The museum even had tissue dispensers at parts of the main exhibition, it was quite unlike anything I'd seen before. 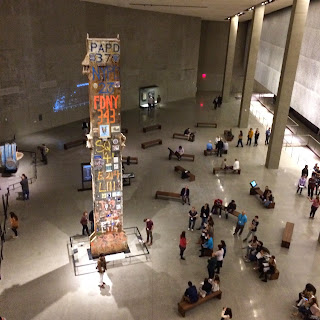 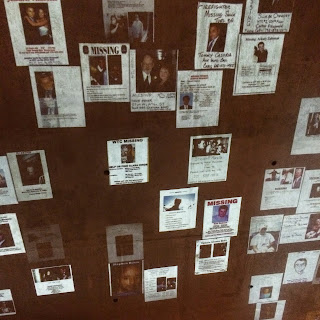 One of the smaller treats we had was the Leslie Lohman, which is a really nice space devoted to LGBTQ art and artists. The mission statement reads: 'The Leslie Lohman Museum of Gay and Lesbian Art is the first dedicated LGBTQ art museum in the world with a mission to exhibit and preserve LGBTQ art, and foster the artists who create it The Leslie-Lohman Museum embraces the rich creative history of the LGBTQ art community by educating, informing, inspiring, entertaining, and challenging all who enter its doors. The Museum is operated by the Leslie Lohman Gay Art Foundation, Inc., a non-profit founded in 1987 by Charles W. Leslie and Fritz Lohman who have supported LGBTQ artists for over 30 years.' 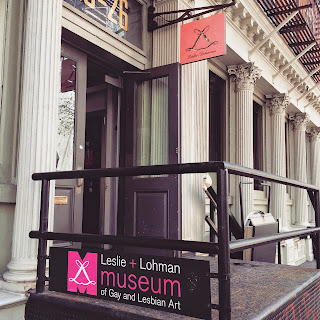 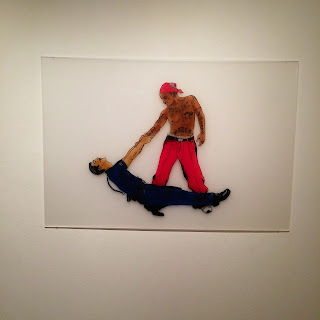 The exhibition we saw was called 'Irreverent: a celebration of censorship'. The museum hosts up to 8 exhibitions a year, which is pretty remarkable for a non-profit venture, it was also one of the very few free museums we visited, which seems like a rare treat in New York, where entry to most museums is in excess of $15. I really wish there was an equivalent to this in London. 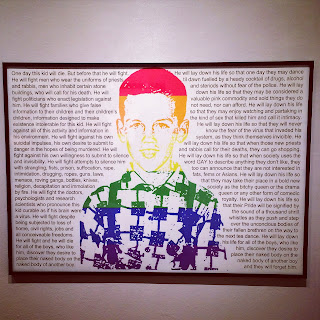 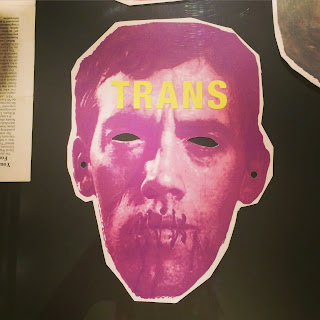 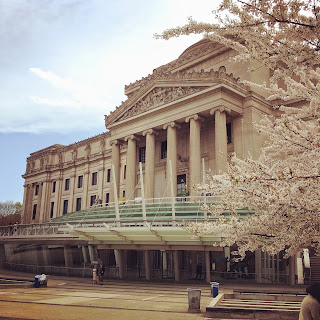 I think my favourite museum overall was the Brooklyn Museum. Lauren had recommended I go and see the Kehinde Wiley exhibition there, and the museum was already on my housemate's to do list. It is one of the best art exhibitions I have seen in ages. Wiley paints huge portraits of people of colour in classic heroic poses, with rich and florid patterned backgrounds. They really are incredible, and the exhibition also featured work on stained glass and sculpture. We also saw the Jean-Michel Basquiat 'Unknown Notebooks exhibition' and looked around the permanent collections. It was great to see a museum genuinely privileging its local artists, and especially exciting to see people of colour represented on such a scale in such a huge museum. 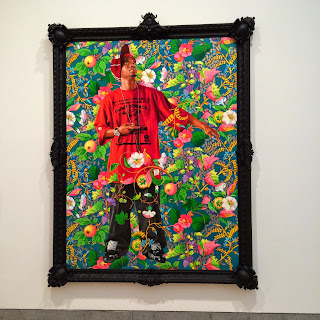 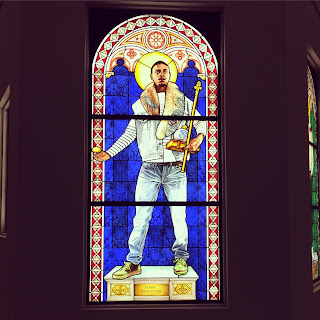 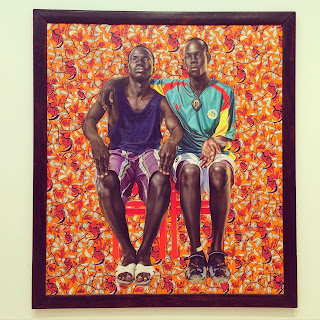 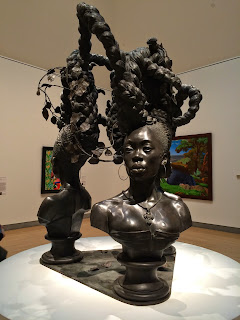 These are just a few of the things we saw, we also saw a small exhibition of Keith Haring's work, the American Folk Art Museum, the Museum of Morbid Curiosity (which was a HUGE disappointment), the Museum of Sex, the Brooklyn Botanic Gardens (which a lovely couple kindly gave us their tickets for so we didn't have to pay!), a super cute little museum at Coney Island, and Lauren and I had a little tour of the Metropolitan Museum of Art.

If you get the chance to go to New York, definitely do! It was incredible and I hope I get the opportunity to go back one day, I feel like we only scratched the surface!

Here's a little bonus picture of me admiring some of the art at the American Folk Art Museum: 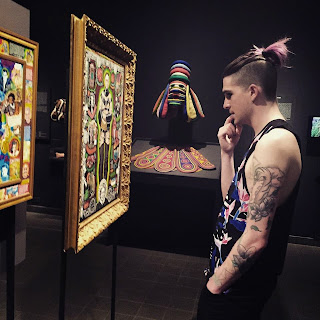 (I've said this before, but blogspot really isn't built for lots of pictures, so please excuse the messy formatting of this, especially if you're viewing on a phone...)
Posted by Sean at 04:46 1 comment: