I seem to start every blog post with an apology for how long it's been since I last blogged, so I won't with this one. But I will try to blog more regularly now that my thesis is out of the way. I want to post about some of the work I've been doing at Sutton House recently, a recent visit to Gunnersbury Park and some amazing interpretation at Nunnington Hall. But in the mean time, I want to address a glaring problem with the May Morris: Art and Life exhibition (on until Jan 28th 2018) at the William Morris Gallery in Walthamstow.

It is, of course, really lovely. Morris' talents have long been in the shadow of her father, so it's no wonder that such a comprehensive overview of her design and craftswomanship is so beautiful to behold. The problem I have with it is, perhaps predictably, the lack of mention of Mary Lobb.

To get up to speed with this particular bugbear of mine, check out my earlier posts about similar problems I had with Kelmscott Manor, former home of May Morris and Mary Lobb, and the artworks I made in response to it here, here, here and here. (I should note that an exhibition about Mary Lobb has just finished at Kelmscott, I didn't get the chance to see it, as it's difficult to get to Kelmscott if you don't drive, so I can't comment on how it covered their relationship, but it's great to see a spotlight on her).

First, I'll highlight all of the mentions of Mary Lobb in the exhibition, then I will address some of the objections I often encounter when highlighting the absence of a queer narratives in such exhibitions, with this one in mind.

Mentions of Mary Lobb in the exhibition:


Nowhere in any of this do we get a sense of the closeness between the two that would be evident with better interpretation. They lived together for the best part of 20 years, and hearsay has it that they shared the same bed, this seems to me that once again Mary Lobb's significance in May's life is being overlooked or swept under the carpet, whether platonic or otherwise. 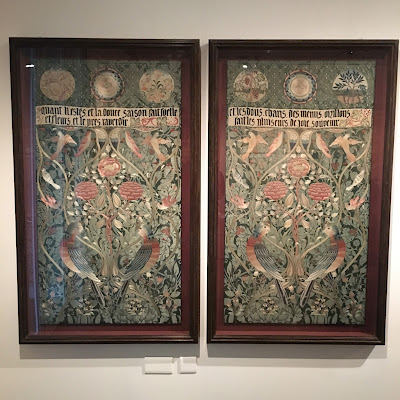 The following are things I often hear in response to historic figures being read as LGBTQ, so I thought I would respond to them here. I also expect these would be the kind of defences people would make about Lobb's exclusion from the exhibition:

The exhibition was a showcase of Morris' work, not a biographical exhibition

That's not strictly true. The exhibition of work is shaped around a timeline of May's life, which includes biographical information throughout. Curator Michael Petry once said (I'm paraphrasing) 'if you mention the wife, you have to mention the relationships he had with men' (about a male artist), and since there is mention of the May's relationships with George Bernard Shaw, and Henry Sparling, so too should there be information about her relationship with Lobb.

There is no proof that their relationship was anything but platonic

There is also no proof that she was sexually attracted to George Bernard Shaw or Henry Sparling. There is proof that Lobb and Morris lived together. A few years ago I spent a day at the archive at the William Morris Gallery and asked to see all of the material relating to Lobb, so I know that there is plenty of material that shows that other people around them thought that there was an atypical closeness between them, or more to their relationship than merely companionship (in fact, I made a sound piece called The village folk had a lot to say about it using the words of their contemporaries verbatim).

All the more reason to include her. She was a working woman, and an important part of May's life. Figures like her are all the more relatable to visitors today than anyone else in the exhibition. I was first drawn to Mary Lobb because she is an androgynous figure, she instantly spoke to me in a way that many historic figures do not.

Lobb, and more specifically, the relationship she had with May Morris is not well documented enough

Indeed not, but curators and interpretation staff in museums draw conclusions every day. I'm not asking that they 'out' May Morris, but that they aren't dismissive of such an important relationship, or that perhaps they acknowledge that many, even in their lifetime, assumed the two were a couple.

To say this, assumes heterosexuality as the default, or that May Morris being a lesbian, or bisexual is somehow shameful. How often do we assume that someone was straight with no proof? There's plenty of proof that Morris' relationship with Mary Lobb was a more enduring and important one than any she had with a man. I think it's not too far of a reach to jump to this conclusion.

Those are just some very quick thoughts about it. I'd be really keen to hear from anyone who visited, or was involved in the Mary Lobb exhibition at Kelmscott Manor, to see how they approached the relationship, and to hear if any more archival material was dug up in the process. That all said, if you want to have a look at a load of very beautiful embroideries, for free, then I recommend the exhibition. If you're looking for any mentions of the queerness of the relationship between May Morris and my favourite historic butch, Mary Lobb- then you'll probably be disappointed. 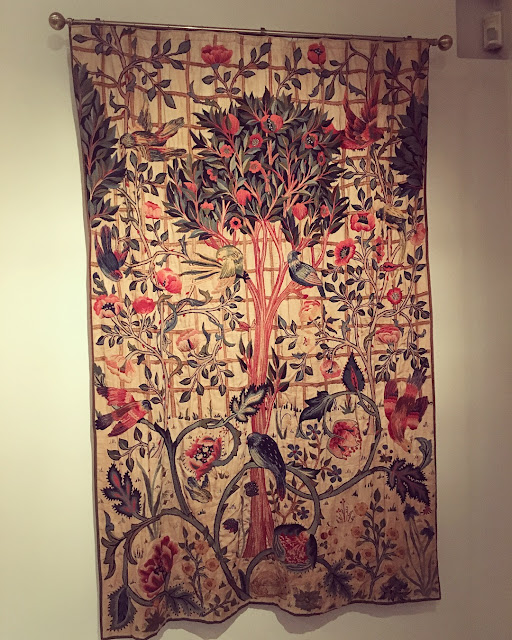